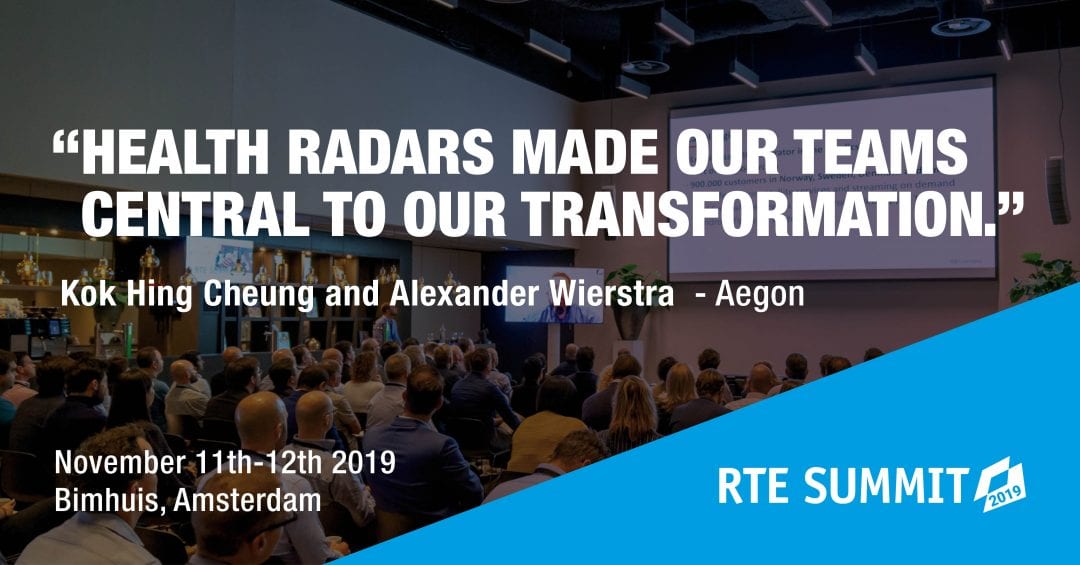 Aegon Asset Management: “Health radars made our teams central to our transformation.”

Aegon Asset Management Agilists Kok Hing Cheung and Alexander Wierstra will present together at the RTE Summit. “We’re positively surprised by this powerful growth platform… and we wanted to share our experience.”

It isn’t a sponsored contribution if the company behind the product isn’t on stage. When Kok Hing Cheung speaks about AgilityHealth’s ‘radars’, he does sound a bit like an advertisement though: “Finally we have a real sense of how we’re doing as a Team or a Train, rather than a collection of socially desirable statements.”

Neither Kok nor Alexander work for AgilityHealth, the company behind the radars. Both work at Aegon Asset Management, the investment company for Dutch insurance agency Aegon. Kok Hing Cheung is a Scrum Master for 2 teams, involved heavily in ART-level ceremonies. Alexander is European Transformation Lead, also acting as an RTE for the company’s Dutch Release Train in an interim capacity.

“We used to work with maturity assessments as we started with our implementation of SAFe, so some three years ago. Getting a grip on team maturity is hard, but it’s important to set an aspirational goal: something to keep striving for. Until we learned about the Agile Health Radars, we used conventional assessments and got conventional results. They were, sadly, mostly predictable statements about team performance and we weren’t that happy with them.

We were given a demonstration of the AgilityHealth Radars by Agile consultant Theo Geelen. We want to show everyone at the RTE Summit how the energy and focus changed in our team while we used the online tool, and why it gave us a more reliable insight into our performance over time than anything we’ve seen so far. It may look like we’re being paid to spread the gospel, but we’re just happy with the product.”

Meet Kok and Alexander at the RTE Summit

The two Aegon Agilists will present at the RTE Summit, along with Agile champions such as Carl Starendal, Eelco Rustenburg and leadership speakers such as Dirk van Uffelen and Steve Barnett. Tickets to the Summit are almost gone, so reserve your seat today!