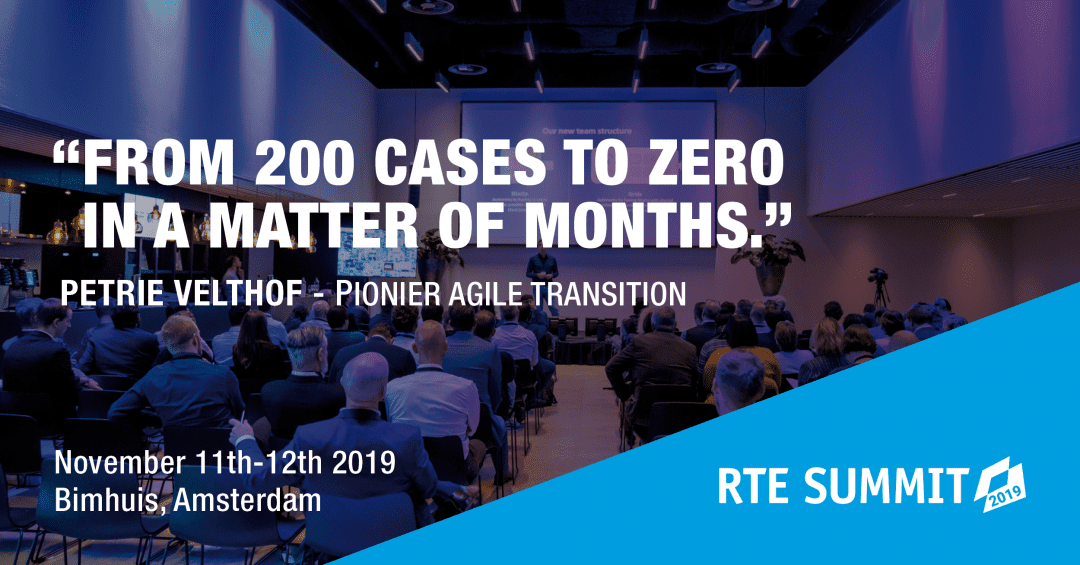 Petrie Velthof, Dutch National Police Force: “From 200 cases to zero in a matter of months.”

Petrie Velthof pioneer the Agile transformation within the Dutch police force takes the stage at this year’s RTE Summit to introduce how the Agile way of working is increasingly allowing the police to work faster and with higher satisfaction rates – for officers as well as civilians.

Around two years ago, Petrie Velthof introduced the way of Agile working to a few innovation-minded teams in the Force. At the same time “Q”, the innovation start-up movement within the police force started experimenting with agile as well. Results were promising and the movement grew. Today, with over 200 Agile teams operating at different levels of maturity and Agile leadership increasingly involved, she says: “Agile is not an experiment anymore, it’s becoming our new way of working.”

The success of Agile

“The first team that I coached was a long-term digital financial investigation. It was a massive forensics project and the project leader on the case was interested to see if the team could work in Scrum. So, we trained everyone on the case and the public prosecutor acted as the product owner.”

“For the public prosecutor becoming a product owner was a huge investment…she went from discussing the case once a month, to suddenly being having to be there every week. But in true Agile fashion, they were able to steer the investigation more quickly than before and focus on the specific lines of the investigation that would have a genuine impact on the file to court. In end, the public prosecutor calculated that working Agile had required less of her time than conventional ways would have. The whole team was able to complete the investigation in record time, in fact.”

Leading from the bottom up

“We are very proud of our bottom-up implementation of Agile. Initially, I was asked to implement Agile as a top-down strategy…create a plan and roll out Agile throughout the whole country. So, when I said no it came as a bit of a surprise to the members of the board. My focus was rather on optimally supporting and connecting all the existing teams, discovering what works well, what they need to further succeed and creating the environment to support that.”

Back to the core

“Agile is a great success within the police force and we are already seeing that it increases the effectiveness of our police work. The focus is on going back to the core of police work, trying to eliminate some of the protocols and planning that make us ineffective. One local crime team went from having over 200 stacked up ‘bench-cases’ to zero, within a couple of months. They also had a sickness rate of over 10% which dropped quickly to 2%, and this wasn’t just a peak; it’s still around 2% today.”

Become part of the conversation

“I can see today how Agile approaches are not just helping us work better internally, ‘one team, one department, one leader at a time’; they also bring us in closer contact with civilians and other organisations. This is our journey and I look forward to sharing at this year’s RTE Summit.”

If you want to hear more about the Agile transformation at the Dutch Police Force, purchase your tickets to come to this year’s RTE Summit!