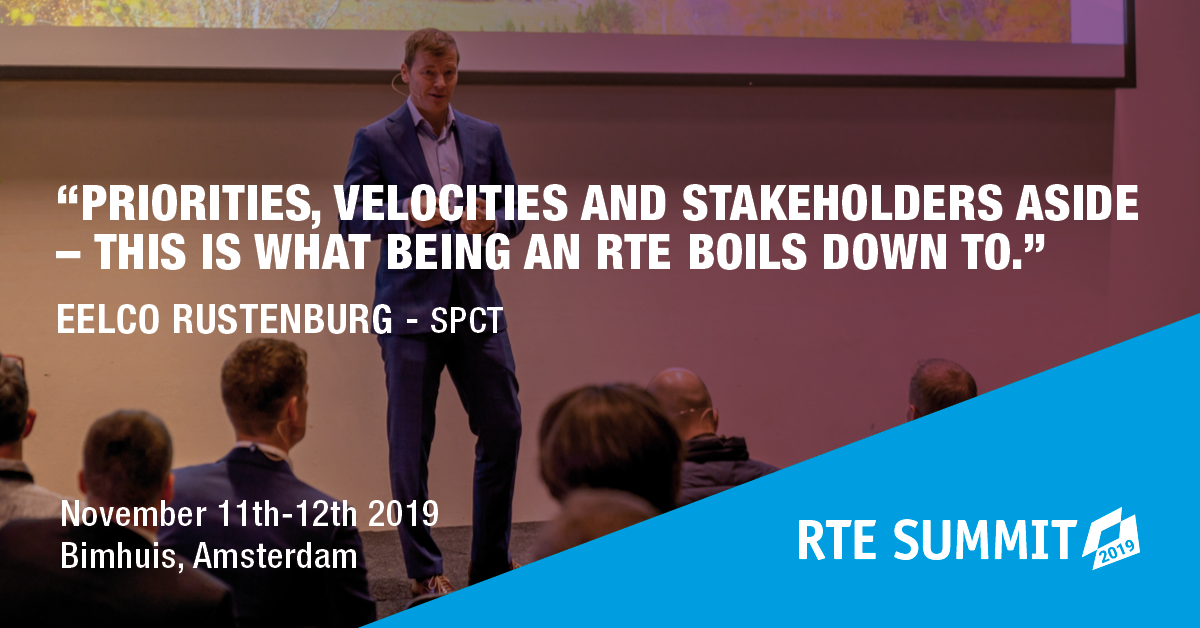 “Priorities, velocities and stakeholders aside – this is what being an RTE boils down to.”

Keynote speaker at the RTE Summit  Eelco Rustenburg looks ahead to his contribution on November 12th.

Renowned SPCT and big-picture thinker Eelco Rustenburg’s keynotes are usually a thing to look out for: high-energy, visionary, playful contributions, a welcomed break from sessions that excel at niggling over technical details. We asked him what he looks forward to sharing at the upcoming Summit:

“The theory of the RTE is a lot of planning and priorities management; portfolio tracking and stakeholder juggling. In practice though, it’s your grasp of group dynamics that matters most. It’s the psychology, stupid! This is a role that requires people skills more than anything else, because more than anything else, you’re forging a team – building a tribe, even – from nothing.”

Forging teams made up of people who are already in other teams. Forging teams from people who might lack any cultural similarity, who might live in different time zones, who might have different beliefs and values altogether. Any coach in any sports team probably has it easier because all those people are at least practicing the same sport, so there’s a common language. All the RTE has the same employer for everyone. Go forth and build your tribe, young RTE! And good luck…!

So how do you build a tribe from nothing? There are many ways. Invent a common language; invent silly hats, common codes and rituals. Get drunk together, a well-used tool of course. Share a common secret. Build a rite of passage. Or, create a common adversary. That’s why demagogues are so good at building popular momentum from nothing – though most of us wouldn’t want a true demagogue to run the Train now, would we…?

I look forward to sharing with the crowd some of the tools most powerful in building a tribe, building momentum. I’m still pondering a few options though. Expect surprises!

Meet Eelco Rustenburg and others

Listen to pioneering SAFe Agilists such as Joe Vallone, Eelco Rustenburg and Carl Starendal at the RTE Summit on November 12th at the spectacular BIMhuis venue in Amsterdam. Ticket sales are picking up, so if you plan on going, reserve your seat today!

12
Oct
The ‘RTE of the year' in 2020 reveals why you need to join the 6th RTE Summit in November
8
Sep
The train is coming : ‘RTE in a Week’
24
Aug
Changing Times require Agile Minds: Agile Coach Conference 2021