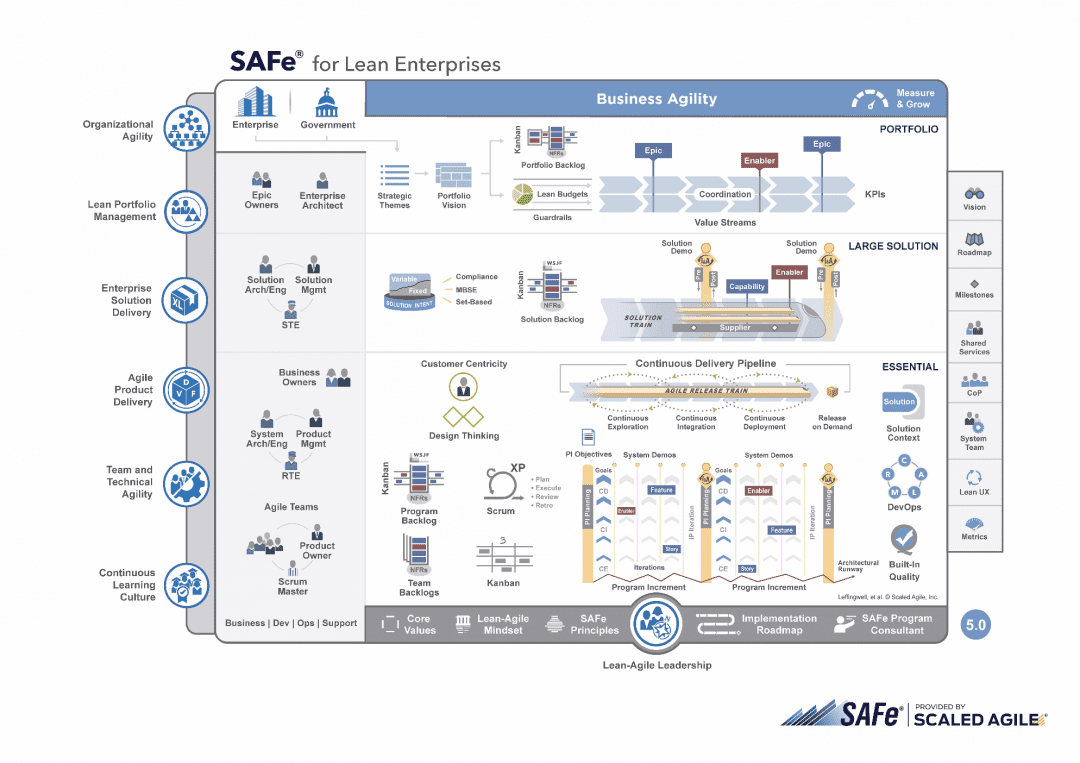 With the recent unveiling of SAFe 5.0, the world’s leading framework for Agility at scale has acknowledged in the theory what leading organizations have been pioneering in practice: to spread Lean/Agile principles far beyond digital development and IT. From Finance to HR and from Sales to Facilities, SAFe 5.0 is where Agile means Business. But wait; there’s more.

The new version of SAFe contains several major improvements and redesign, making the 5.0 version number very much in order. What we currently see as the most striking improvements:

Let’s go over them one by one.

SAFe has always been about combining teams into Trains, as per the mantra ‘Train everyone; launch Trains’. The now-deprecated, lowest ‘Team’ level didn’t include much that wasn’t already present in the underlying Scrum framework, so it’s correct to recognize that limiting SAFe to the level of the single team isn’t really SAFe at all. It only starts to come together… when the first Train launches.

While the two bear a very similar sounding name and the difference is subtle, they do indicate significantly different concepts. One flows from the other, we might say: the competence of Organizational Agility describes the mind-set that should pervade the entire internal organization: thinking around value, thinking beyond departments and siloes; the Business Agility is the overall result, meaning a business performance that breathes with the market and responds to customer behaviors quicker than anyone else.

Click on the image below to see the full preview of SAFe 5.0! 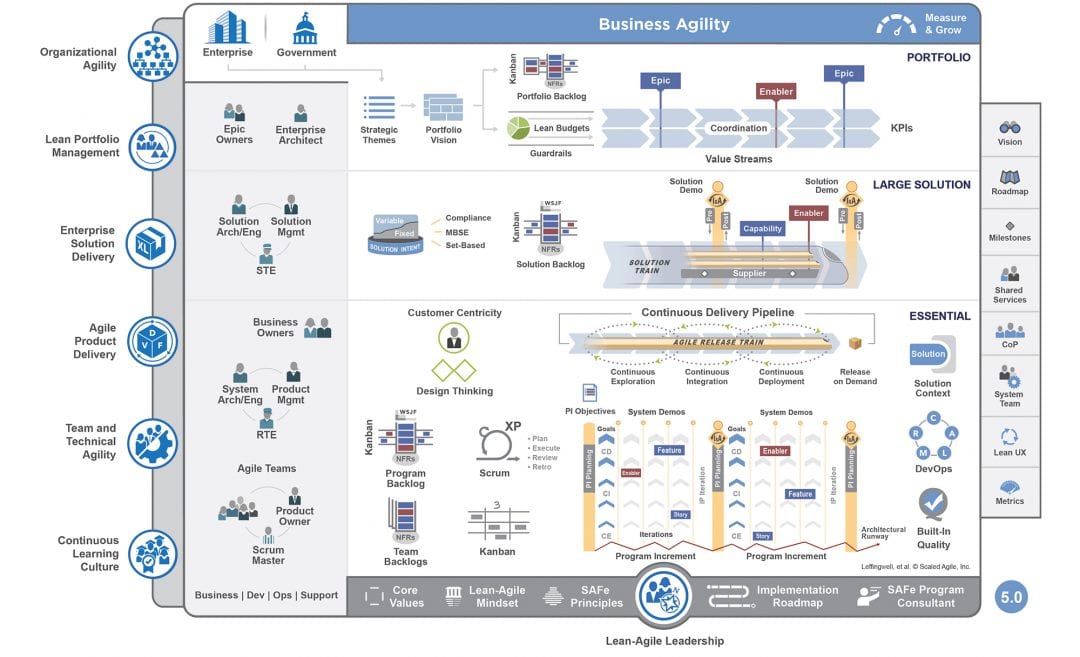 This new competence enshrines several underlying competences such as Innovation Culture, Learning Organization, and Relentless Improvement. The exercise to explore, embrace and implement SAFe itself is of course already a tremendous effort; now this preparedness to take nothing for granted and to never consider improvements ‘done’ is elevated to a principle competence.

The customer has always been central to the Agile principles. In SAFe though, this didn’t translate with enough conviction: the ‘customer’ construct appeared in different layers of the framework as one scaled it upwards. In similar fashion, Design Thinking has also been given a prominent place in the framework ‘Big Picture’, though it already features in the APSM (Agile Product & Solution Management) certification.  Along with several other approaches that thrive on close customer feedback loops, the SAFe organization is now challenged to venture out and ‘Go See’ in the world around it like never before.

The newly added principle 10 is ‘Organize around Value’ invites organizations to complement the conventional, universally familiar functional hierarchies with the highly contextual concepts known as value streams. We know these well from the Agile Release Trains: ideally each ARTs should be built around a value stream. Value streams are difficult to identify at first, because one needs to abandon the strongly engrained organizational notions and think purely in terms of which results the customer is willing to pay for, and how that result comes about precisely.

In our entry-level trainings at Gladwell Academy we always had to underline how one of the central tenets of SAFe is how the different roles relate to one another like a Russian doll: the SAFe Scrum Master scales up to an RTE, who scales up to an STE. Likewise from Product Owner to Epic Owner. The increased calm and order of the new version is probably the improvement that is welcomed most by those just getting into the framework.

Looking to find out more about SAFe 5.0 or other issues related to Agility at scale? Talk to us.