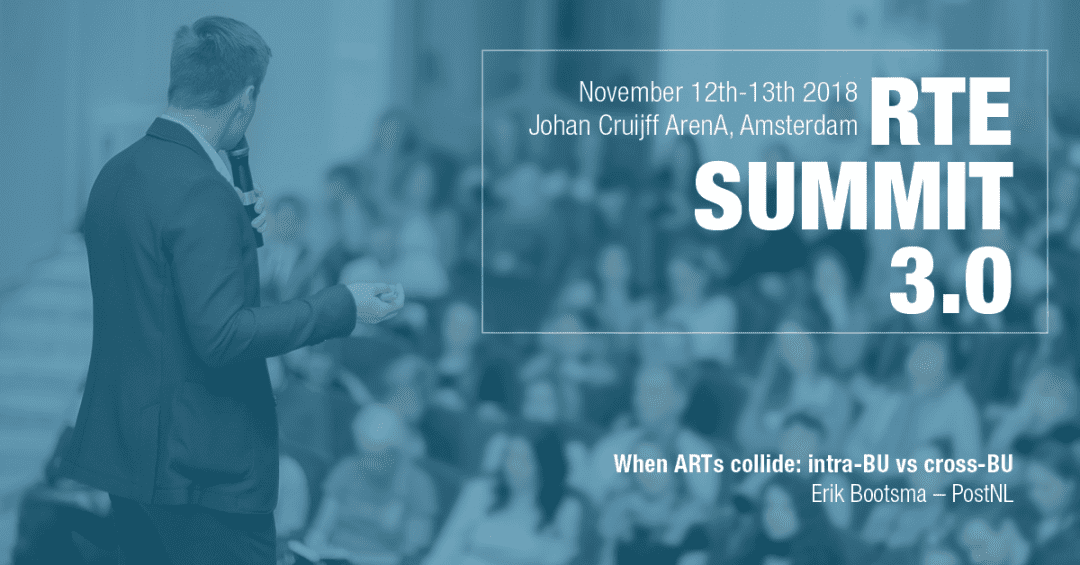 RTEs Erik Bootsma and Jeroen Manten both drive a substantial ART at PostNL, the Netherlands’ leading player in parcel logistics and mail. Erik joins us to shed some light on what he has planned for his part of their joint contribution to the RTE Summit: “Even in a single organization, approaches diverge. Let´s dive in and see how our profession can mature.”

Erik: “PostNL has three major business units – Parcels, Mail and International. I’m driving the ART for Parcels, aligning several teams towards an overarching goal of reducing our time-to-market in that division. My co-presenter Jeroen drives the ART for Customer Excellence, aimed at – of course – improving our CX. So there’s the first difference to notice: Jeroen’s ART transcends multiple business units, while mine is concerned with a single unit. It’s possible that most of our divergences stem from that one difference – but it’s a little early to conclude that just yet.”

No progress without support

“Anyway, the market for mail and packaging is undergoing massive changes and it’s hugely competitive. For PostNL staying ahead of the curve is both a condition for survival and an exciting challenge. But the changes implied in embracing SAFe are massive for us too, so charging ahead will only yield resistance. There’s the second difference between our two ARTs from a soft-power perspective that we’re going to touch on: I need to pay a lot of attention to gathering support for what we’re doing – more than to applying SAFe principles in detail. How I forego on SAFe to acquire the support I need, is a large part of our contribution at the event.”

“We’ll also deal with how we’ve each molded and adapted bits of SAFe to suit our needs. We both look forward to hearing what the audience thinks of what we’re doing…! The PI Planning board for example: in mine, I’ve added a component to it that I think really enhances my insight. It’s a simple snapshot that tells me whether a Feature has actually been planned for each team. We´ll go into these things more deeply at the Summit, so be sure to turn up for that if you’re interested.”

If you’d like to know more about how Erik and Jeroen each manage their ARTs at POSTNL, be sure to reserve your seat at the RTE Summit. Join us on November 13th at Amsterdam ArenA in the Netherlands. Reserve your seat here!